15 movies that stuck with me, in no particular order, part 3

11. The Doom Generation: The one that started it all, the movie that cemented my devotion Gregg Araki and post-modern queer cinema in a single night, and thank the fat busted Jesus that the Hollywood Video in Glendora, ass crack of suburbia, had it on the shelf. All do respect for the Godfather, John Waters, our exulted creator, but his movies never spoke to me the way Araki’s did. They belong to the West coast and the 90s in same absolute way that Water’s all belong to Baltimore and the 80s. If you know what I mean. I wrote my thesis on the post-modern satire of Araki’s Nowhere, arguably his best work. The professor asked me what grade I thought I should get. I said a B. And I got a B. I still wonder if there was any actual criteria for my grade beyond what I felt I should get. It would be sort of perfect if there wasn’t. Considering the subject matter. 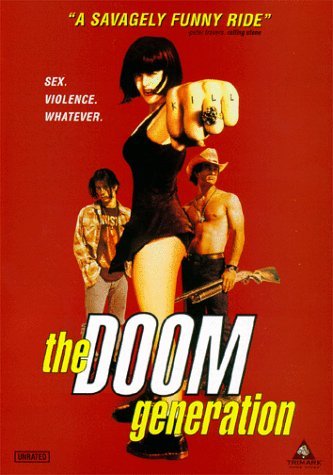 12. Shelter: It’s hard to put my finger on why exactly I love this movie so much. The plot is middling, the dialog is basically awful. And yet, it pulls on my heart strings every time I watch it. Young artist reunites and forms a friendship with his absent best friend’s older brother and they fall in love amidst the drama of poverty paired with dysfunctional family drama. The shots of San Pedro and Laguna Beach more than make up for the mistaken portrayal of those two far apart cities as being next to each other. It sounds boring when I say that the cinematography is the best thing about this film, but the perfectly framed shots, long pans of the ocean, and moody switches between love story and family story are the reason nobody notices the crap dialog or the shaky plot. I could turn the sound off and watch this whole film, and every second would be perfect. The acting of the two mains compensates for the dialog and the plot as well, although supporting roles aren’t reliable. I didn’t think that much of it the first time I saw it, but I find myself watching it over and over. Especially when I want something beautiful to zone out to.

14. SLC Punk: I used to think this movie was so important. It spoke to me, man. If there’s ever any indication to what a tool I was, it’s the fact that I thought SLC Punk was deep. But I still love it. The hair, the angst. The teen-age declarations of truth, beauty, and the American way. It stinks of nostalgia. It’s probably been my most favorite movie for the longest period of time.

15. I Now Pronounce You Chuck and Larry: I get so much shit for liking Adam Sandler, and I don’t care. I love him and I want to lick his face. People will call me a philistine, and maybe I am, but Sandler movies, in addition to being about directionless man-children, are also about loving your friends and your family, being there for them and supporting them no matter what. When Sandler is good, he’s heart-clenchingly good. As in angelic, and Chuck and Larry is a prime example of this. When you love your bros, you’ll do anything for them. Up to and including gay marrying them so their kids don’t lose their health insurance. Or whatever weird reason they had to get married for.