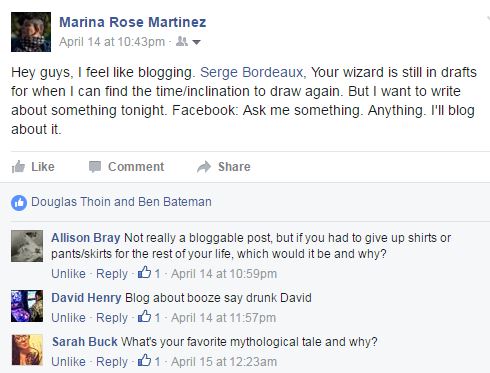 In the battle of shirts vs. pants, pants and skirts win. Primarily because I like a clean vagina and clothes on my bottom half keep stuff from getting in there. But also because I hate bras, and no clothes on my top half (I’m assuming) also means no bras. Because fuck bras.

I don’t know enough about booze to really talk about it. Except that well into adulthood I absent-mindedly have a habit of sniffing water before I drink it because I had enough times in childhood where I unexpectedly grabbed the wrong cup and took a huge gulp of straight vodka. Which is gross.

I like the way that Athena sprang out of Zeus’ head fully formed, and I always felt like her virginity was too much interpreted in a Christian context in modern retellings of the myth. Adding the bullshit about purity and modesty that didn’t really belong to her. Athena doesn’t fuck or show men her body, not because of Christian shame or timidness, but because of feminist power. A person’s body, their sexual energy, and the knowledge of that is a privilege. Not because sex cheapens a person, but because knowledge is power.